After lying for a while in a way that puts pressure on a nerve in your arm, it may happen that you no longer feel your arm anymore. You may no longer perceive its location and size, and it may even feel like it does not belong to your own body. If this condition lasts for years, the representation of the upper limb in the brain becomes chronically distorted. This body representation disorder is a neurological disorder and is one of the more prominent long-term consequences of stroke. It severely affects how people use their body in the environment to move, act and sense.

If left untreated, sensory and body representation deficits may lead patients to perceive the affected limb as shorter, less sensitive, less responsive, and eventually even to ‘forget` it.

In the EU, stroke is the leading cause of adult disability according to a 2020 study, and Covid has worsened the scenario. The number of patients with stroke requiring long term assistance and rehabilitation has dramatically increased since the outbreak of Covid-19, as well as flu-related strokes in young people. While some stroke survivors will recover, impairment of the upper limbs can become chronic and seriously affect the behaviour of the patient in up to 75% of stroke patients.

Now, a consortium of neuroscientists, clinicians and neuroengineers, involving the Laboratory of Cognitive Neuroscience of the EPFL (directed by Olaf Blanke), MySpace Lab at CHUV, (directed by Andrea Serino), Villa Beretta Hospital (directed by Franco Molteni), led by the EPFL Translational Neural Engineering laboratory (directed by Silvestro Micera), has shown that carefully tuned electrical stimulation of the neuromuscular system, combined with current rehabilitation practices are promising for recovering upper limb control and embodiment in stroke patients with long-term disabilities. The details of their neuromuscular electrical stimulation (NMES) protocols tested on 45 chronic stroke patients are published today in MED, the new clinical and translational journal of the CELL editorial family. This work was supported by a Foundation advised by CARIGEST, by Fondazione CARIPLO, by the SNSF NCCR Robotics, and by the Bertarelli Foundation.

“Our approach has the potential to facilitate neurorehabilitative interventions that target multiple perceptual domains, including tactile acuity, perceived body size, distorted feelings of the arm, and consequently, restored use of the arm,” explains first author Andrea Crema. He continues, “Our approach reduced the perceptual dissociation of the affected limb, that’s why it’s so important to pursue targeted electrical stimulation of the muscles in chronic stroke survivors, and to personalize the treatment to counter specific deficits.” 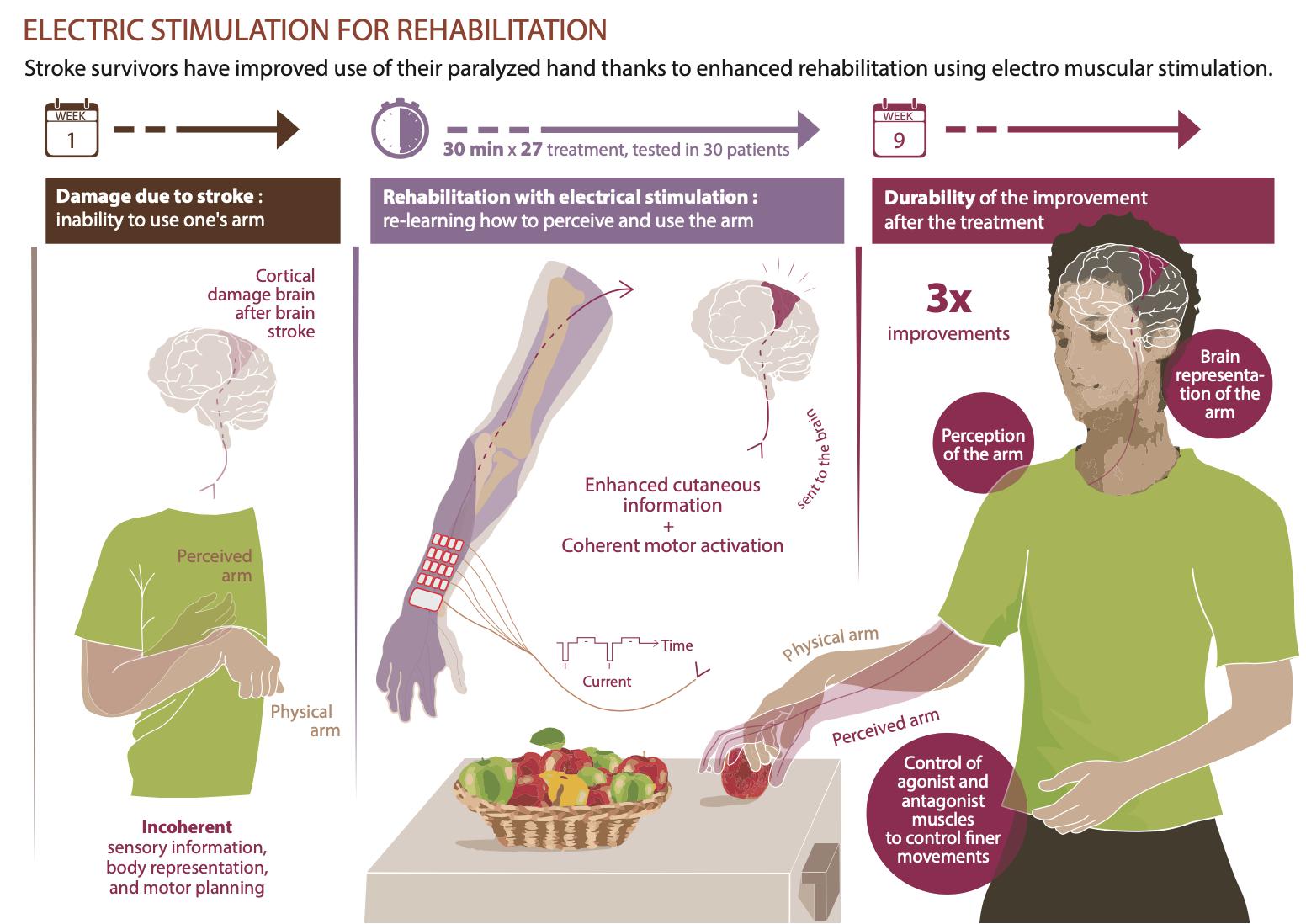 Motor and somatosensory improvements persisted after the end of the treatment. Moreover, the electrostimulation protocol improved body representation, i.e. the perceived dimensions and altered feeling towards the affected limb. “Interestingly, reduction of altered feelings correlated with motor improvements, and depended on the quantity of electrostimulation,” explains Crema.

Forty-five chronic stroke patients underwent twenty-seven sessions of NMES over a period of nine weeks. Each session lasted 90 minutes, of which 60 consisted of conventional physiotherapy rehabilitation, and 30 minutes of a supplemental treatment based on a robotic glove or on custom NMES. The patients were split into three groups with a different mix of conventional rehabilitation and NMES treatment. The first group used a robotic glove throughout all of the supplemental sessions to perform task driven exercises. The second group used a novel NMES paradigm in all of the supplemental sessions. The third group used the robotic glove for half of the sessions and the NMES for the other half of the session.

The scientists then measured motor performances, sensory capabilities, and body perception for each patient, before, during, and after the nine-week clinical trial.

Patient performance improved earlier with NMES than with the robotic glove. At the end of the treatment, the motor improvement was higher in groups having partial or complete NMES compared to the glove alone. Also, the improvement extended to somatosensory function and body representation measures.

«This study shows the importance of a multi-faceted assessment of functions after stroke and pave the way to more effective clinical rehabilitation protocols.»      Silvestro Micera, EPFL TNE

The current study focuses on chronic stroke patients who had received multiple interventions before, reaching what was considered a plateau of improvement. These results show that targeted, intense intervention, especially via NMES, can push recovery further. They also suggest that but sub-acute stroke patients, those who have just suffered a stroke, may also benefit from NMES, although this has yet to be tested.

“The challenge with sub-acute stroke patients relies in the more volatile sensory perception and body representation. They may have higher benefits from NMES if properly personalised to their quickly changing conditions,” explains Crema.

One of the big novelties of the study is to target and assess not only motor recovery, but also sensory deficits, and body representations. “This study shows the importance of a multi-faceted assessment of functions after stroke and pave the way to more effective clinical rehabilitation protocols,” says Silvestro Micera.

The scientists are currently working on a new system able to provide finer levels of motor and sensory stimulation, and with broader varieties of stimulation.