Since Wilhelm Röntgen discovered them in 1895, X-rays have become a staple of medical imaging. In fact, barely a month after Röntgen's famous paper was published, doctors in Connecticut took the first ever radiograph of a boy’s broken wrist.

There has been a lot of progress since. Aside from radiographs, which most people have taken at least once in their lives, today’s X-ray medical uses includes fluoroscopy, radiotherapy for cancer, and computer tomography (CT), which takes multiple X-ray scans of the body from different angles and then combines them in a computer to generate virtual cross-sectional “slices” of a body.

Nonetheless, medical imaging often works with low-exposure conditions, and therefore requires cost-effective, high-resolution detectors that can operate at what is called a “low photon flux”. Photon flux simply describes how many photons hit the detector at a given time and determines the number of electrons it generates in turn.

Now, scientists led by László Forró at the School of Basic Sciences have developed exactly such a device unit. By using used 3D aerosol jet-printing they developed a novel method for producing highly efficient X-ray detectors that can be easily integrated into standard microelectronics to considerably improve the performance of medical imaging devices.

The new detectors are made up by graphene and perovskites, which are materials made up of organic compounds bound to a metal. They are versatile, easy to synthesize, and are at the forefront of a wide range of applications, including in solar cells, LED lights, lasers, and photodetectors.

Aerosol jet-printing is fairly new, and is used to make 3D-printed electronic components like resistors, capacitors, antennas, sensors, and thin-film transistors or even print electronics on a particular substrate, like the case of cell phone.

Using the aerosol jet printing device at CSEM in Neuchatel, the researchers 3D-printed perovskite layers on a graphene substrate. The idea is that, in a device, the perovskite acts as the photon detector and electron discharger while the graphene amplifies the outgoing electrical signal. 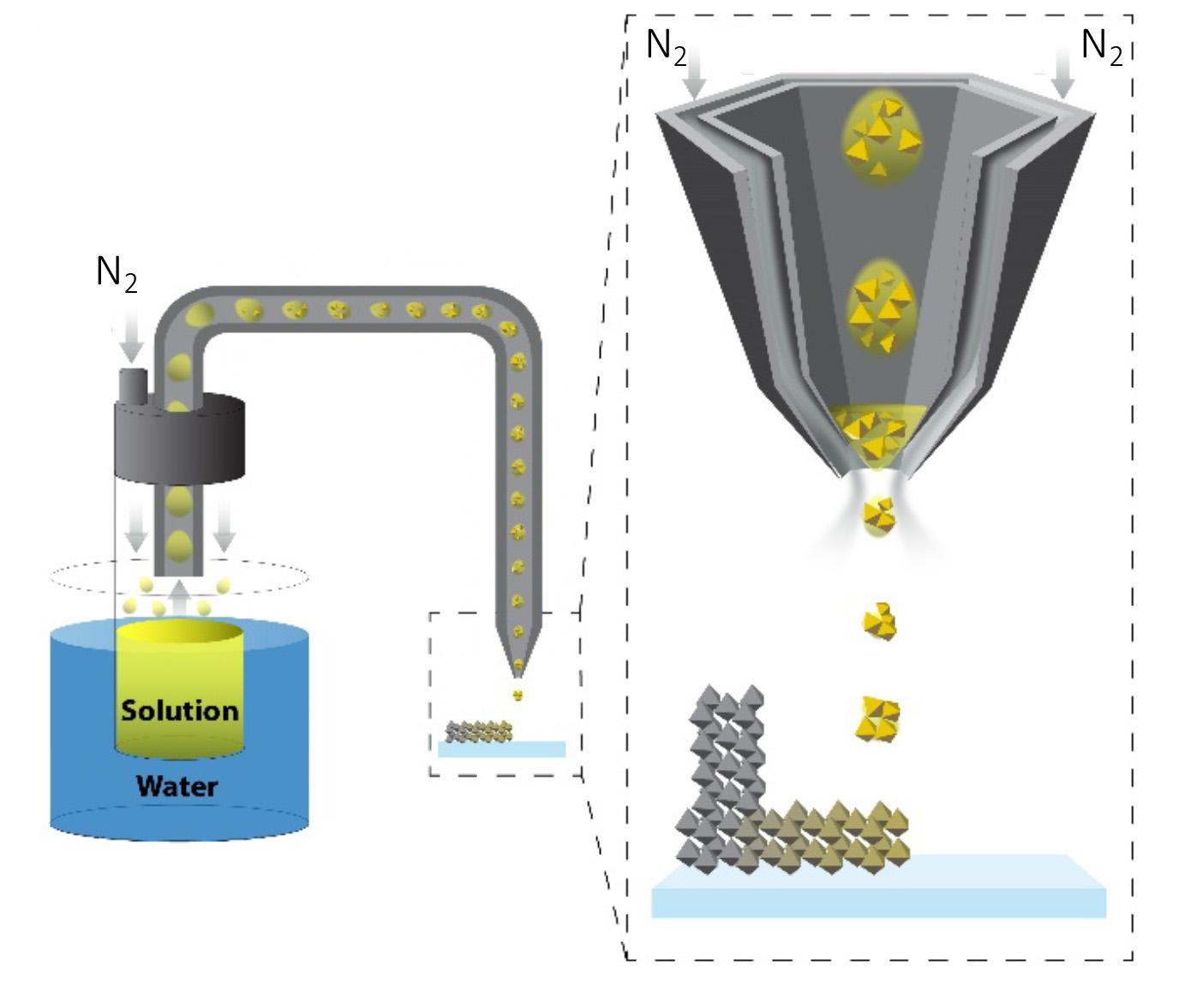 Schematic representation of the Aerosol Jet Printing method developed in this study. The agitated methylammonium lead iodide perovskite solution is focused to a predefined position at the nozzle by the nitrogen (N2). The particularity of the material is that formed nanocrystals in flight do not spread out on the graphene substrate, allowing the creation of 3D architectures. Credit: Glushkova et al ACS Nano.

The research team used the methylammonium lead iodide perovskite (MAPbI3), which has recently attracted a lot of attention because of its fascinating optoelectronic properties, which pair well with its low fabrication cost. “This perovskite has heavy atoms, which provide a high scattering cross-section for photons, and makes this material a perfect candidate for X-ray detection,” says Endre Horváth, the research team’s chemist.

The results were stunning. The method produced X-ray detectors with a record sensitivity and a four-fold improvement on the best-in-class medical imaging devices.

“By using photovoltaic perovskites with graphene, the response to X-rays has increased tremendously,” says Forró. “This means that if we would use these modules in X-ray imaging, the required X-ray dose for forming an image could be decreased by more than a thousand times, decreasing the health hazard of this high-energy ionizing radiation to humans.”

Another advantage of the perovskite-graphene detector is that it is simple to form images using it. “It doesn’t need sophisticated photomultipliers or complex electronics,” says Forró. “This could be a real advantage for developing countries.”